WHEN TO GO TO TANZANIA ON SAFARI: THE CLIMATE AND THE BEST TIMES OF YEAR

In considering a Safari or a trip in Tanzania, no doubt you have questions about the best time of year and the weather you will find ihnen. For example:


All these are considerations to keep in mind when planning your trip, above all to align your wishes and timing possibilities with the Tanzania climate in order to enjoy to the fullest all Tanzania can offer while you are there.

The primary issue will be how the seasons and the rains during the year in the different areas of Tanzania affect animal movements.

THE CLIMATE AND SEASONS IN TANZANIA

Tanzania lies several degrees south of the Equator, and the extent of its tropical climate is determined above all by altitude.
First to note is that the highland areas (for example the National Park of Ngorongoro) and the mountainous areas (for example Kilimanjaro) enjoy lower temperatures than the country average as well as a lower humidity relative to the plains, coastal areas, and islands of Zanzibar and Pemba. 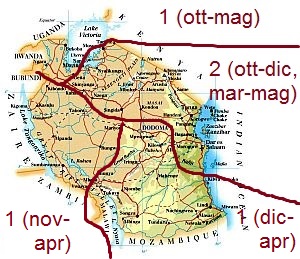 That said as a general picture, let’s look at the various areas:


THE BEST TIMES TO VISIT TANZANIA

The best times consequently are the dry months of July, August, and September, which are typically cooler, sunnier, and with very infrequent rains. Also from end December through February are good especially on the coast where the temperatures are slightly higher than inland. (Note, however, that December, January, July, and August are months of highest tourist influx, thus our advice is to reserve flights, lodging, and safaris well in advance.)

The months at the edges of the rainiest seasons (March, June, October, December) are worth considering as well, of course preparing for some rain during the day, particularly in the parks.

Lastly, because of Tanzania’s tropical climate, the country actually may be visited year round, even in the cooler monsoon months of April and May, provided adequate preparations are taken. In point of fact, these green rainy months yield the highest concentrations of animals for viewing.

WHERE TO GO AND WHEN

In consequence of the above, let’s now look at the most well known destinations, specifying the best times of each for visit or Safari.


If you have questions on any of the above, or if you are interested in other destinations, please feel free to email us at info@tanzaniaprivatetours.com or telephone / WhatsApp us at +39-344-1880809 (we do speak english).
It will be our pleasure to assist you. Likewise, you are most welcome to make contact if you wish to discuss our designing a special tour for you.